Archibald Graham Esq (1680 Scotland, died in Scotland). A descendant of Sir William Graham, the 7th Earl of Mentieth, descendant of Duke of Montrose and Claverhouse, the Earl of Dundee. He had three known sons; John Graham Esq, Alexander ‘Sawney’ Graham and Daniel ‘the miller’ Graham (1713 – 1800 in Cumberland Co).  All three sons emigrated to North Carolina after the battle of Culloden in 1745 at which the Scottish Highlanders under the flag of Jacobite Bonnie Prince Charlie were defeated by the British. The Duke ‘Butcher’ of Cumberland was determined that an uprising would never again occur. Clan chiefs were deprived of their legal power, weapons taken, kilt and tartan banned.

John Graham Esq (8 Aug, 1714 North Knapdale, Inverary, Argyllshire, Scotland; died 14 Sep, 1797/alt. 1798, Montrose, Cumberland Co, NC) and (second wife?) Elizabeth Smilie (1732 – Feb 1807) immigrated to Cumberland (now Hoke) County, North Carolina in 1766/9. The Smylies came to NC from Scotland and became staunch Presbyterian ministers throughout the southern state. John and Elizabeth Graham settled on Mountain Creek, in the far western part of the county. Very little is known about the family. He did have a post office in his home, “Montrose.” This was, interestingly enough, the name of the titular head of the Graham/Graeme clan in the Scottish Highlands. One may surmise that John Graham was an important member of the clan based upon his local standing as well as the prominence of many of his relatives, but there is scant evidence remaining to substantiate this.

John was a gunsmith and is buried at the Montrose Cemetery (Fort Bragg). John Graham allegedly fought in the revolutionary war, rising to the rank of Captain. He and Elizabeth farmed 50 acres on Big Muddy Creek. He is said to be a descendant of the Duke of Montrose, Claverhouse, Earl of Dundee. John was loyal to the House of Stuarts, and suffering hardships, requested and received a land grant of 100 acres in 1767 in the Cape Fear area of NC.

Margaret Graham (19 Jul, 1764 – 1830) saved the life of Archibald Graham when ‘patriots’ came to kill him; pretending smallpox. She married Daniel ‘Buffalo Dan’ Patterson born 13 Aug, 1757 in NC, died 1843 in Clay Co, Alabama in 1883. He was so named because he lived on Buffalo Creek and established  the Buffalo Mill on the Creek, a tributary of the Lumber River in Cumberland, now Hoke Co, NC. Because the creek never ran dry, this mill was famous for always being powered for grinding grains.  Daniel Patterson and John Gillis operated the first cotton gin in West Cumberland County in 1815. Margaret and her husband founded the old Bethel Church. Margaret is buried in the Patterson Graveyard between the old mill and Gillis’ gin, her grave covered with flat rocks from the place known as Sanatorium. So sleep many of their kin and at least three of her children.

Robert Graham married Mariah Thomas (Dec 27, 1815 New Jersey – Dec 22 1896 Ashpole Church, NC) on July 29, 1840 in Cumberland, NC. A bond of 500 pounds was posted by Robert Graham and Daniel Baker Esq, in effect guaranteeing that there were no restrictions to the marriage. This would have been posted on the Church door for all the public to see. The bond was payable in the event that the marriage was not legal. Robert and Mariah lived in the original Graham home until 1858, then moved to Ashpole Church, Robeson Co, NC. 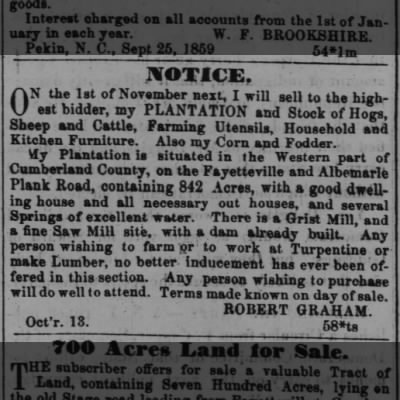 Robert sold his plantation in November 1859, relocating the family to Ashpole, NC.

Last will and testament of Robert Graham:

In the name of God Amen. I Robert Graham of the County and State above mentioned being weak in body but of sound and disposing mind do make and ordain this my last Will and Testament as follows:

1st: I give and bequeath my soul to God who gave it and my body to the earth from whence it came – and after my just debts are paid I give and bequeath to my wife Mariah Graham all my real and personal property of whatever description to have and to hold during her natural life – and at her death – I give and bequeath to my two sons William H Graham and John T Graham all my land where I now live together with all my stock of horses and mules hogs and cattle household and kitchen furniture together with all my farming implements wagons and carts to them and their heirs. As this bequest is to be equally divided between my two sons William and Thomas Graham, but if one of them die without heirs then it is my will and desire that the surviving brother inherit all his part of the property and should they both die without heirs – then it is my will and desire that it shall go to my daughter Sallie Ann, D P McKinnon’s wife and their children and should William or Thomas either of them want to sell their part of the land, it is my will and desire that he shall sell it to his brother without they both agree to sell, then let them sell all the land together – it is being five hundred thirty or forty acres more or less belonging to the plantation.

I give and bequeath to my daughter Sallie Ann, D P McKinnon’s wife two hundred Dollars to be paid by my executors hereinafter named. And it is my will and desire that should there be a growing or housed crop on the plantation let it go to the use of the plantation after the debts and rents are paid.

I appoint my son William H Graham and John T Graham executors to this my last will testament in testimony thereto I set my hand seal. Robert Graham

I appoint my son William H Graham and John T Graham executors to this codicil to my last will and testament.

In witness whereof I have signed sealed and published and declared this codicil to my last will as my will at my residence in Robeson County State of North Carolina this the 21st day of January 1879. Robert Graham

The said Robert Graham of said place signed and sealed this codicil and published and declared the same as his will and we at his request and in his presence and in presence of each other have written our names as witnesses.

Margaret Graham born 1846 is listed on the 1860 census with her parents.

In the 1870 census, Margaret, Thomas William are all at home with Robert and Mariah. John Thomas left for Texas to become a minister. William Haywood stayed with his parents and is listed in the 1880 census.  I have no records of the fate of Alexander Hamilton Graham; the two youngest boys succumbed in 1855, presumable due to illness.

Bro. Graham was one of our most useful men, and no man has held a surer place in the affections of the people whom he served. He was a visiting preacher, going into the homes of all the people, and winning them to Christ by personal contact with them. The connectional interests of the church received his most careful attention and no institution nor observance required by the church was ever neglected. From the founding of the Texas Methodist Orphanage he represented the West Texas Conference on the Board of Managers, and was untiring in his work to make provision for orphan children. Bro. Graham was a successful revivalist. Very many in the various charges he served were added to the Lord through his ministry, and during the last year of his life, his preaching was attended with great spiritual power. At the close of his meetings that year, worn with excessive toil, he suffered a protracted spell of fever, from which he never fully recovered. During the last weeks of his life he was almost constantly in prayer and communion with God. He said that he felt that God was getting him ready for some great event. It was true. The purified soul was about to go into the presence of the King.

We laid his body away in the cemetery at Kyle to await the resurrection. The members of his flock, with many of other churches, all of whom loved him, followed him to the grave and made great lamentation over him.

To his widowed companion and orphan children, the conference extends its loving sympathy. We commend them to God, and at the same time extend over them our protecting arms.