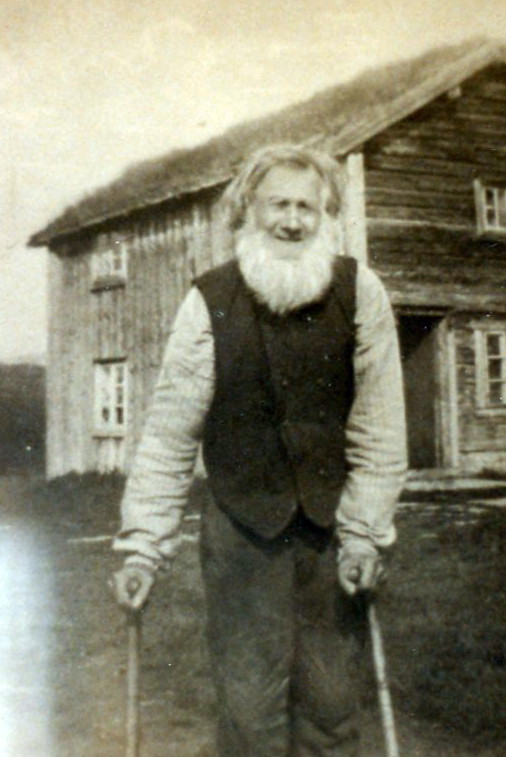 This photo of Lars Olssen Stenoien, pictured in front of the barn, was given to me in 1983 by Norwegian relatives. Look at the thatched roof (about 1879).

He was born May 7, 1832. He is the younger brother of Beret Larsdatter (married Jens Arnesen Grontvedt) who settled in Polk Co, MN. He is the younger brother of my direct ancestor, Peder Larssen Stenoien, who married Ingeborg Johannesdatter and settled in Gordon Township, Todd Co in 1879. Siblings Ola Larssen Stenoien, Marit Larsdatter Stenoien and John Larssen Skomakermo stayed in Norway.

Hans Larssen Stenoien (7/5/1832 – 1910), the younger brother of my ancestor, Peder Larssen Stenoien was the earliest Norwegian immigrant in our family. He married Marit Pedersdatter Stordal (April 10, 1836 -11/11/1911) on 11/1/1856 in Norway. According to the 2000 census, he and his wife arrived in 1865. They settled initially in Wanamingo, Goodhue Co, MN. The great Indian uprising in the 1860’s ended in 1866. Only then were settlers able to safely move into Todd County. The family moved to Little Sauk Township in 1871, settling near Maple lake, five miles to the northwest of Little Sauk.   The area was heavily wooded, and in the early years Indians were often seen hunting in the woods. The men often went away in the summers to work on the railroad while the wives and families stayed home working the farm. Hans was quite active in the local churches, initially Little Sauk and later Salem churches. In 1872, the Gordon Church was built. Hans Larson Stenoien was trustee of the church. Initially, it consisted of a cabin and was called the West Church, part of Little Sauk Church. It was incorporated November 26, 1878 as the Salem Church. By 1883, geographical considerations mandated building a new church to the southwest, Sauk Valley Church. The Stordal congregation stayed stayed at Salem. The Augsburg strife, as well as conflict within the church regarding expansion, did finally split the congregation in 1896. The Stordal group built the modern Salem Church building. Hans Larson Stenoien furnished lumber for the pulpit in 1899. Hans was the “klokker,” or lead singer for Gordon (later Salem) church. All of the children were baptized and confirmed in the Lutheran Church. Most of his Stordal relatives settled in Gordon Township to the west. Hans raised his family during a very difficult time economically. The long depression of 1873-1879, panic of 1893 and panic of 1907 led to widespread bank failures and high unemployment. This eventually led to the establishment of the Federal Reserve Bank in 1913.

The first four children were born in Norway. Kjerstin Feb 1, 1957; Martha Rebekka Feb 16, 1859; Lars Mar 7, 1861; Anna July 19, 1863; In 1865, Hans Larssen, Marit and the children immigrated to Goodhue County, Minnesota. They probably sailed to Quebec, and traveled overland via train to southern Minnesota. There were many established Norwegian farmers here, and this served as an opportunity to earn some cash in order to be able to start one own’s farm.

In 1871, the family moved to Little Sauk, Todd County, MN settling near Maple Lake.  These were difficult times. The late 19th century was the setting for the Long Depression of 1873 – 1879. 18,000 thousand businesses went bankrupt, including 89 railroads.

In the 1880 federal census, Hans Larson, Mary, Lars, Nellie, Ole, Henry M, Johnny and Betsy S are listed. Kirsti and Martha have married. There is a 16 year old Annie Larson, single servant girl born in Norway, listed in nearby Sauk Centre, MN working for Hendry, a grocier. To date, that is the last trace I have of her.

CHILDREN OF HANS AND MARIT:

Kjersten ‘Katie’ Hanson was born Feb 1, 1857 in Meråker, Nord Trondelag, Norway, baptized on Mar 1, 1857. Since she was born in Norway, her father’s name Hans was her formal last name. She immigrated to Goodhue County, MN in 1865. Thomas arrived with his family in 1881, settling in West Union, Todd County. Kjersti married Thomas (Gudmundson) Thompson (oldest child of John Johanes Rotvold and Ingeborg Jonsdatter Gillan on 13 December, 1885 in Gordon township. They moved from Gordon Township to Grand Prairie, later Grand Forks, ND (1900 Census). In the 1900 census, husband Thomas Thompson is listed as a hotel keeper. In addition to wife Kattie, Gilbert J (b Nov 1886), Hattie M (Feb 1889), Tilda Josefine (Apr 21, 1892,), Liljen Karolina (Apr 21, 1892), Ida G (Dec 1894), Otis Melvin (Jun 30, 1897) and Clara Serine (Jan 21, 1900) are listed as well as sister Matilda Thompson (Feb 1884), boarders and servants. It is interesting that Otis and Clara were baptized in Gordon township in 1900, while the family lived in Grand Forks, ND. In the 1910 census, the family lived together in Grand Forks, ND. Thomas, Katie and Hattie were grocery clerks, Gilbert 23 worked in the wholesale grocery business and Tillie,18 was a dry goods clerk. Thomas Thompson is listed in the honor roll for purchasing a $50 Victory Bond. Katie Thompson was quite active in the Ladies Aid guild for the first Lutheran Church, mentioned several times in the local Grand Forks newspaper. Times seemed to take a drastic turn for the worst after the death of Lillian in December 1918 of pneumonia. Thomas Thompson died in Walsh Co, ND in 1920,. No additional articles can be found in the paper after 1919. Katie Thompson died Jan 18, 1943 in Hennepin County, Minnesota.

Children of Kate and Thomas:

Children of Martha and Ole Bracken:

Lars (Hanson Stenoien) Larson  was born March 7, 1861 in Meraker, Norway. He arrived in 1865, the family settling initially in Goodhue Co, MN. In 1871 the family moved to Little Sauk Township, Todd Co. In the 1880 census, Lars is listed at home with his parents. Lars married Kjersti/Kirsten Pederson Stenoien (born May 1858 in Meraker, Norway), on Nov 25, 1880 at Salem Church. Kirsti was the fifth child of Peder and Ingeborg Larssen Stenoien, first cousin to Lars. They arrived in 1879 on the Steamship Tasso from Norway.  Lars and Kirsti farmed in Gordon Township. To give you a little idea of name changing, he is listed as Stenoien in the 1905 census and is listed as Lars H Larson on his tombstone in the Salem cemetery. Makes for challenging geneology detective work! All of their children took the name Larson. Lars Stenoien was one of the first to have a binder in his neighborhood, and the neighbors flocked there to satisfy their curiosity and to watch the new machine perform. But when Daniel Danielson Sr. noticed that the camwheel on the binder had stopped ever so often, he rushed up grabbing it to make it turn and had four fingers cut off his hand! When the Salem church split, the famiily joined the Sauk Valley Congregation. Lars H Larson died 9 April, 1915 and is buried in the Salem Cemetery.  The 1920 census lists Katie Stenoien, Peter 31, Carry M 29, Selmer G 22, Clarence J 17 and grandson Russell Larson (Goodrie). In 1930, Kate Larson is living in Minneapolis with Sam 32, Clarence 27, Carrie 38 and daughter in law Clara 26. In the 1940 census, Kate Larson is living with Mary Goodrie, Russel Goodrie, Ralph Stenoien, Carrie Larson 49. Kirsti Pedersdatter Larson died Jan 18, 1943 and is buried at Salem Church.

Children of Lars and Kirsti Larson

Anne Larson was born 19 July, 1863 in Stordal, Nord-Trondlag, Norway. She arrived with her parents and siblings in 1865, settling in Goodhue County. She is listed with her family in the 1875 Minnesota census, age 11. She was confirmed at Salem Church in 1878. (Anne Hansdatter Stenoien 13 Oct, 1878.).  There is an Annie Larson listed as a servant in the 1880 Census in nearby Sauk Centre working for Ruth and Nicolus Hendry, a grocier. There are no additional records found on Anna.

Nellie Pauline Larson was born in Goodhue Co, MN on Dec 3, 1865 and baptized on Jan 6, 1866 at Holden Lutheran Church, Goodhue Co, MN (witnesses Lars Larsen Gjemse and Kirsti Olsdr), Nellie was confirmed at Salem Church, Gordon Township, Todd Co in 1881. She is listed on the 1875 Minnesota and 1880 federal census as living with her parents on the farm in Little Sauk Township near Maple Lake in Todd County. Knowing that her sisters spent time in East Grand Forks, Polk County, MN a search revealed that Nellie P Larsen married Berthin R Signalness (born 9 September, 1862) on May 15, 1889 in Pope County, MN. In the 1885 Minnesota census, Bert was living with his parents on their farm in Langhir Township, Pope County, MN. Her husband Bert died on Dec 4, 1891 and is buried at Fron Lutheran Church in Starbuck, Polk Co, MN. Bert and Nellie had no children. On August 28, 1893, Bert Signaless was granted a patent on a quarter of land (160 acres) for the northwest quarter of Section 27 in Township 49 of Range ten west of the fourth prinicpal meridian in Wisconsin, unfortunately posthumously. In 1894, Nellie B Signalness is listed in the Superior, Wisconsin city directory as a domestic. She may have been trying to work or sell her land patent, to which she was entitled. Superior, WI lies just south of Duluth, MN. The land was heavily wooded at the time. remember that the Panic of 1893 initiated a long depression , nearly as bad as the great depression. In 1895, Nellie B Signaless is living in Long Prairie, MN working as a servant. From 1896 to 1904, Nellie Signaless is living in Duluth, MN, working as an ironer. She would have been 39 at the time. She is not listed on the 1900 census. I identify no later records for Nellie.