Joseph “Cooper” Melton was born in 1777 in Nash County, NC, died 10 Oct, 1849 in Benton Co, TN. He moved to DeKalb Co, TN in early 1800 and to Benton Co, TN about 1821. He served in the war of 1812 in Capt. James Tate’s company of infantry in Col. Stephen Campbell’s regiment Tennessee militia from Jan 28 to 10 May 1812. For his service he received $31.10. Enlisted as “Tennessee Volunteers” and served in the push to drive the Creek Indians from Northern Alabama. For his service from DeKalb Co in the Creek war (1814), old Cooper received a land warrant in Warren Co, TN. He married Phoebe Manning and had 12 children.

William Franklin Melton, born Aug 20, 1831 in Big Sandy, Melton County, Tennessee, married Rachel ‘Sara’ Holland in December 5, 1855 (b Apr 14,1838). He served as a private in the confederacy, 54th regiment, Tennessee Infantry. He died July 1, 1876.  The cause of death was pernicious anemia due to chronic malaria. He is buried at the Flatwoods Methodist Cemetery in Camden, Benton Co, Tennessee.

He is listed in the 1860 census with a farm of 301 acres, 43 of which was improved. In the 187o census, wife Rachel, Pervella, Hugh, Merrit, John Franklin, Foster and Thomas Jefferson are listed at home. Real estate was valued at $800, possessions $500. They lived near the town of Big Sandy.

In 1860, the county was rural. There were abundant resources: timber, game salt, land and water. This territory was ceded to the United States by the Chickasaw Indians in the Jackson purchase of 1818. The Memphis and Ohio Railroad, completed in 1861, stopped nearby. In 1944, the Tennessee Valley Authority flooded much of the surrounding land, including the land occupied by our ancestors. 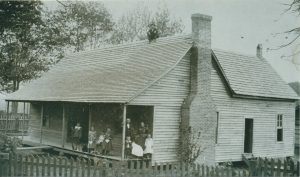 1896
Benton County, Tennessee, USA
William Hughey Melton and Martha Jane “Mattie” Pierce Melton are the adults standing at the nearest corner of the porch. Their children left to right are Oliver Carlos Melton, Ida Beulah Melton, William Franklin Melton, Flora Lillian Melton, Hughey Edgar Melton, Howard Athey Melton and Maude Luna Melton. The man on the roof is unidentified, but likely a relative. This house is now under water from the Kentucky Dam across the Tennessee River. Photograph courtesy of Elaine Eubank, from the collection of Maude Luna Melton Pierce. 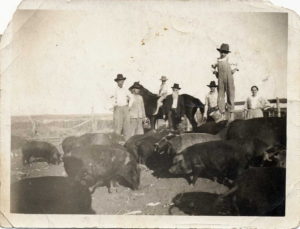 William Hughey Melton is the man with the white beard. His wife, Martha Jane “Mattie” Pierce is the woman in the photo, at the right. The two youngest boys are likely Howard Athey Melton and Harvey Freeman Melton, but one is possibly William Franklin “Willie” Melton. The three other men appear either to be the wrong age for the remaining Melton sons or do not bear a resemblance to them. 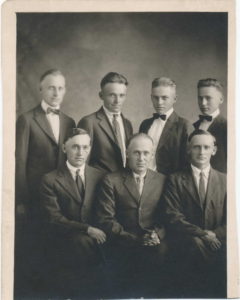 Carlos Melton set out on his own,  settling in Las Animas County, CO near Pueblo. Ida Beulah, Robie’s great-grandmother, married William Cherry in Benton Co, Tennessee. The remainder of the family left for Texas around 1906.

Letter from Carlos Melton to the Wellington Leader Newspaper in 1940:

Seasons greetings, and Christmas times bring sweet memories of long ago when a dear mother and daddy would begin to wonder how and in what way “can we make our little bunch of twelve children happy on Christmas day?” And in that little home today memories linger near, and a sad thought that this ever-loving mother left us 6 years ago. Our blessed lord saw fit to take her away. Her work was done on this earth. Also one sister and one brother have passed away, making three broken links in the family.

We all loved them so well. May God help us to live so as to meet them again some sweet day.

And this same dear old daddy who was so good and kind to her and to us children is still with us today. Oh, how thankful we are are, and may this Christmas bring to him peace and happiness and good health, and the only thing that keeps me from spending this Christmas with him is my financial situation.

But I must say we children always had our stockings filled chuck full on Christmas morning when we would get up. Today we are scattered some distance apart, each with a family of our own, running from one to eight in the family. So let’s children each one give something to our children to make them happy on Christmas day.

Teach them as we were taught, to be honest through life and stay sober. Me being the oldest child, I am sending this message. May this Christmas bring good health and happiness to each individual child of this family and of their families. May each of us make our home happy on that day as were made by our parents.

Let us remember that this world is full of trouble and sorrow. So speak some cheering words to some person who may feel as though life is not worth living. After all, it is a pleasure to be here and to love and be loved by others. And may each one of us be proud of a mother and dad like ours.

Though Dad is 82 years old, we are proud of him and may God bless and keep him in the remainder of his days is my prayer.

Now if the editor of the Wellington Leader will see fit to publish this in next week’s issue, I hope each brother and sister gets to read this copy, for this is my sincerest wishes to Dad and all of you.

A merry Christmas and a happy new year.

Note of April 1955: To my surprise I was visiting Almeda and Charles for a week. She showed me this letter. To me it refreshed my memories. Lots of saviour have come, lots of joys have been mine and I am thankful for life and what it means to me. But time is swiftly passing by and our loved ones will only remember us of days gone by. But above all may they be of good deeds done while we were with them. This is my hearts desire, and may God’s everlasting love ever abide with you all. And when my time comes to leave you, that my soul may find rest and happiness in Jesus Christ our Lord. Let us all prepare to meet our Christ the king of kings.

I was the oldest boy at home. Mama had gone to visit her sister, Aunt Mary Phifer and was spending the night with her. The man who bought our place had paid Dad $3500 down. Dad had Flora and Luna iron out the money and sew it in two different packages – one had $3000 and the other $500. We didn’t have mattresses for our beds. Had straw ticks with a feather tick to sleep on. Dad hid the money in his straw tick on his bed. The next day all the boys in the neighborhood was there to play. Dad told me to take all the boys in the neighborhood. Dad told me to take all of the old straw ticks down to the wood lot and to burn them. We took them, eight in all, and made a straw heap on which we played for awhile. We decided to burn the straw. About the time it was burned up, Dad thought of the money. It was too late. The $3000 package had burned. While we were playing we kicked the $500 package out. The corner had burned off it. Dad found the $3000 package, but stuffed it in a fruit jar and mixed all the numbers up. The bank could not make heads or tails of it so dad lost the $3000. He got new bills for the $500 and meanwhile the fellow who bought the place paid Dad the other $3500 he owed. 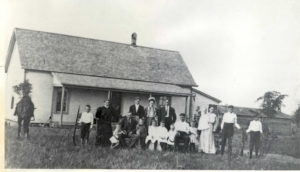 About 1907
Quail, Collingsworth, Texas, USA
Mattie and Hughey Melton with their some of their children and at least one grandchild. Otis is on the left, holding a rifle. His mother, Mattie is second from left. Hughey is seated fourth from left. The trio standing in back seem to be Ed, Luna and Carlos. Ida is standing third from right with a baby on her hip, her daughter, Laura Cherry. Willie is seated fifth from the right. Howard and Freeman are the last two on the right.
From Brenda Josephson

We started for Texas, 10 of us kids still at home. We had killed 16 big hogs, meat smoked and boxed up for shipping. All our household goods got to Memphis. Met a crook there that knew Dad and knew he was carrying the money. He took us all for a street car ride and kept us until nearly train time. Dad hadn’t transferred our belonging to the other Rock Island Railroad. He said, “You let me have the $300 and I will transfer your stuff for you.” So Dad gave him $300. Nothing showed up. Dad knew the postmaster at Memphis and wrote him to see if he could trace it down. We found the baggage at South Memphis. The man had pawned it for $500 and skipped the country. It cost Dad another $500 to get it out of the pawn shop. Dad still had his right mind. How, I don’t know. We rented a place the first year. Had a hundred bales of cotton. I think Dad cleared nearly $500 after picking costs. The next year, we built our own place. Hauled water for one year for the house and stock.

One Saturday morning, I told Dad I wanted to dig a well with a drop auger. He said all right. I had a good little cow horse, so I pulled the drop auger up and down by the saddle horn. We dug one hundred feet the first day, and the hole so crooked up we could let a lantern down the hole and not see the light. So, I had to stop the project. Dad got a well driller to set over the hole. He drilled for two days with a tight rope, straightening the hole out and went on down 25 feet. Got a good well of water. 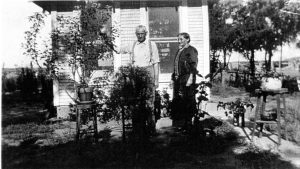 Hugh and Mattie Melton at the Summer Bedroom, just west of the main house of their homestead, taken about 1930. 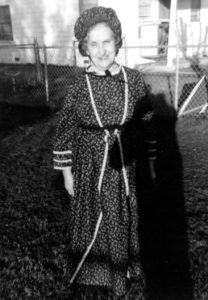 Ida Beulah Melton Cherry taken in front of the house in Quail, Texas.

Herman Edgar Melton, son of William Franklin and Ina Myrtle Killingsworth Melton published a collection in 1968. Here is a link to that historical information:  The Melton Family by Herman Edgar Melton 1968_01