From the Moore Family Bible courtesy of Kimberc09 on Ancestry.com.

Laura attended Marella School. Other children were born to William and Ida while they lived in the Quail area. John Vernon was born April 12, 1907. Thomas Louie was born 1908. Another daughter , Lois was born 1910. Two more sons were born, Edgar Franklin July 16, 1913 and William Terrell 1915.

In 1918, the Cherry family again packed all of their farm equipment, household goods, and livestock in a boxcar and shipped them to Texline, New Mexico. The family drove an old Maxwell automobile to their new location of Springfield, Colorado. William and his oldest son, John, rented a wagon and a team of horses in Springfield and went to Texline to get the family’s belongings. 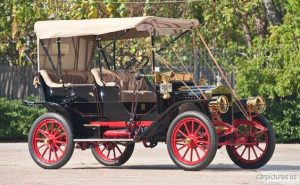 Another daughter, Ethel was born in 1919, in Springfield, Colorado. After two years in Colorado the family decided to move back to Texas. They packed their belongings into two covered wagons and made the trip back to Texas. After seven days of traveling, they arrived in Leila Lake, Texas, in Donnelly County, in time to work in the cotton harvest for several weeks. They then went on to Quail. Here they settled on a farm adjacent to the farm of J.W.L. Cook, father of James Curtis Cook.

James Curtis Cook (Jim) and Laura Cherry were married on November 13, 1921, in the parsonage of the First Baptist Church in Wellington, TX.

The young couple lived with Jim’s parents for awhile at Quail. Jim took a teaching position in the Marella School where C.M. Weaver was Principal.

On July 30, 1925, William and Ida became parents of twins, a son, Paul Lawrence and a daughter, Pauline Florence. This family was still living at Quail. 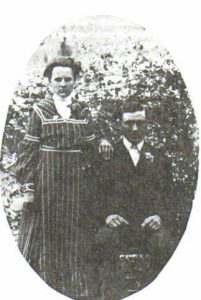 William and Ida settled in Quail, Collinsworth Co, Texas. He died at the age of 89 on June 14, 1970 in Lubbock, Texas and is buried in Quail Cemetery. 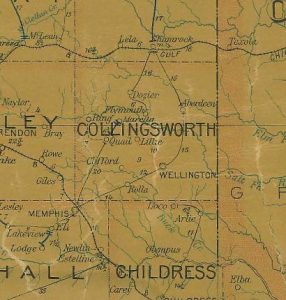 Quail lies in Collinsworth County, in the eastern panhandle of Texas. 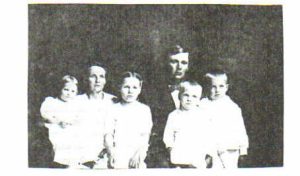 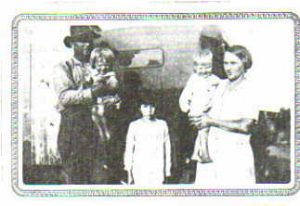 This photo depicts William and Ida Cherry with Pauline, Ethel and Paul about 1923. 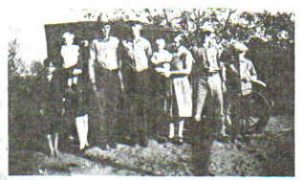 In 1930, the family lived on S Dalhart St in Wellington, Collinsworth, Texas. At that time, William was a laborer who did odd jobs. Youngest son Paul died of endocarditis on May 15, 1933 in Shamrock, Texas. He is buried at the Quail cemetery. On the WWII registration card, William is listed as a farmer in Quail, Collinsworth Co, Texas. In 1954, he is listed as a yardman in the city directory.

Laura Jane Cherry married James Curtis Cook on Nov 13, 1921. They had six children, James D, Lloyd F, Louis Vernon, Eugene W, Vada and Zada (twin girls). Robie remembers visiting them in Lubbock. Laura loved to crochet, and made fun of Robie when she pointed her finger to hold the thread; “What’s you pointing at?” Robie remembers that Laura and James had twin beds in their master bedroom. Jim desperately loved her , you could just tell how much they cared for each other.