Ola Hanssen Stenoien(1745 – 2 Dec, 1834) was the first resident of the Stenoien (sten oyen or “the stone island”) farm. He moved from Tydalen, one valley to the south of Stordal and is listed as occupying the Stenoien farm on the 1801 national census. The valley was resettled about 1780 because of Selbu Kobberverk, which provided work (hard labor) for the men, who were allowed to settle as tenant farmers with their families. He was the first settler on his farm of that era; the valley was previously settled however was vacated after the great plague decimated the populations of Europe in the 1300’s. He married Beret Pedersdr Overvik in 1780 (born in Selbu 1746, died in Stordal at the age of 98 on 6 Oct, 1844 on the family farm).  Selbu lies about 20 miles to the east of Tydal, at the head of a fjord. This was the home of Selbu Kobberverk. The Stenoien farm lies in Stordal, southwest of Meraaker in Nord Trondelag. This is east of Trondheim near the Swedish border. The family arrived after the birth of Anne Margrete in 1786 and before the birth of Ole Olssen in 1790, seeking work at the Selbu Kobberverks as tenant farmers. The three oldest sons did not remain in Stordal (Hans Olssen Teveldal, Peder Olssen Kojdalen, Ole Olssen Gilsaabakken) their namesakes indicating the location of their homesteads.

Picture of the Sten-oyen farm taken about 1984 in early June. Sweden mountains in the background.

This is a picture of the Stenoien farm taken approximately 1984. This was taken in early June; the summers are so cool that the primary crop is grass for the animals, even potatoes were not a sure crop due to the short season. A stream (Stjordalselva) crosses the front of the farm, hence the term “island.” The annual crop of stones kicked up by the frost accounted for the first name, ‘sten’ means stone in Norwegian.

Stordal Kapel was consecrated in 1863 (correction). Peder Larssen did travel to Gordon Township, Minnesota in 1879, after the death of his parents, Lars and Marta.

This links to the jubilee 100 years Stordalen Chapel book…. in Norwegian.

The names of our early ancestors are quite confusing. My great great grandfather, Ole P. Pedersen, was son of Peder Larssen, was son of Lars Olssen, was son of Ole Hanssen. The only thing we know about Ole’s father is that is first name was certainly Hans! In an effort to distinguish each other, a surname designating their farm residence or place of origin was adopted. Various members of the family adopted and later relinquished the name of Stenoien once they arrived in America (too many vowels?). The family of Hans Larssen Stenoien, initially Stenoien, later took on the name of Larson. My great-grandfather, Ole Pedersen, had two neighbors in Gordon Township with the same name, so he changed his name to Stenoien in order to distinguish his family name.

Children of Ole and Beret Stenoien: 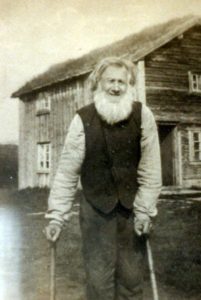 This photo of Lars Olssen Stenoien, pictured in front of the barn, was given to me in 1983 by Norwegian relatives. Look at the thatched roof (about 1879).

Children of Lars and Marta Stenoien: 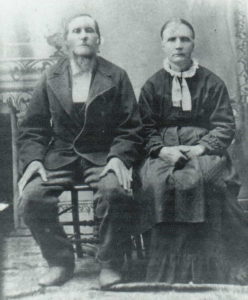 Peder Larssen Stenoien (4/23/1825 – 1908) married Ingeborg Johannesdatter (1823 -1900) on 25 June, 1846. Once it was time to marry, the house was full and the young couple  had to move out from the family farm to secure their own residence. Land was scarce and the closest real estate was in the next valley to the north, Teveldalen, even more remote than Stordal from the closest town of Meraaker.  Teveldal lies to the northeast of Stordal and east of Meraaker following road E14, quite close to the Swedish border. At that time, both Stordal and Tevldal residents attended the Kopperaa Kapel, located about six miles to the east. Peder and Ingeborg resided in Teveldal until after the baptism of Marta Rebekka and returned to the Stenoien farm sometime before the baptism of Johannes.   The family rejoined parents Lars and Marta Stenoien, as well as brother John Larssen Stenoien on the tenant farm.

From the 1865 Norway Census of Nord Trondelag: 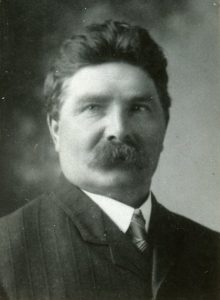 Johannes Stenoien, saw alot of heartbreak in his life.

On April 28th, 1869, our family’s first documented emigrants from Meraaker, Stordal departed from Trondheim on the ship Franklin, destination Quebec. Included in the party were Jens. J Skaardalsvold (43), Sara Skaardalsvold (44), Johannes Skaardalsvold (15), Elisa Skaardalsvold (11), Thorsten Skaardalsvold (8.5), Marit Pedersdatter (tjenestepige 22), John Peterson Rotvold (19), Lars P Stenoien (son of Peder Larssen Stenoien, age 22). The Franklin was owned by Chr. Paus and Hans Hauen in Skien. The Franklin sailed with emigrants from Norway to Quebec 1867 – 1871. Master was Christian Winsnes. In 1869 the “ship” [most likely she was rigged as a bark like the year before and after] Franklin departed from Trondheim Apr. 28, and arrived at Quebec June 18. She was sailing in ballast, and was carrying 303 steerage passengers and 3 cabin passengers. There was an outbreak of Small Pox on board. When the ship arrived to the quarantine station at Grossele, four were sick. Three deaths had occurred on the voyage, a woman of phthisis (wasting away), and two children of diarrhoea and wasting away. Mastered by Capt. Chr. Winsnes, and a crew of 15.

The stenoien family sailed to Quebec, Canada in a ship of this class.

Marit Pedersdatter was the servant girl of the Skordalsvold family on the 1869 journey. 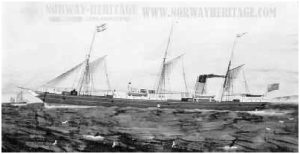 1879 Steamship Tasso from Trondheim to Hull, England. The Allan line then transported the passengers to Quebec, Canada. By the time the rest of the family emigrated, steamships had largely taken over the sailing ship routes.

After the death of father Lars Olsen and mother Marta on the Stenoien farm in Stordal, Meraker, Norway, the remaining members of the Stenoien family departed for Gordon Township, Todd County, Minnesota. The party included Peder Larssen (55), Ingeborg Larssen (55), Kirsti Pedersen (21), Ole Peder Larssen  Stenoien (16, my great-grandfather), Ingeborg Pederson (15), Mali Jensdatter (24), Ane Marie Jensdatter (18), Peder Jenssen (0.5). The steamship traveled from Trondheim, to Kristiansund and thence to Hull, England. There, the Allan line sailed to Quebec. Overland, they would travel by train to Osakis, Minnesota. According to family lore, Johanna Svensdatter Gillan traveled with the group however I find no evidence in steerage records to support this. I believe she remained in Norway and married her sweetheart.

Hans Larssen Stenoien (7/5/1832 – 1910), the younger brother of Peder Larssen Stenoien was one of the earlier immigrants in our family. According to the 2000 census, he and his wife arrived in 1865. They settled initially in Wanamingo, Goodhue Co, MN. He moved to Little Sauk Township in 1871, settling near Maple lake. He married Marit Pedersdatter (April 10, 1836 -11/11/1911) on 11/1/1856.  He was the “klokker,” or lead singer for Gordon (later Salem) church. At the time of the 1885 and 1900 census, Marit’s mother, Kate Johannesdatter (1816-) lived with the family; she arrived in 1872. With the exception of Lars Hanssen Stenoien, the majority of the family eventually moved out of Gordon Township. The children were baptized Stenoien, but later kept the name Larson.

Children of Hans and Marit:

In the 1875 census, Hans Larssen, Marit, Kristin, Martha, Lars, Anne, Nelle, Ole and Henry are listed. In the 1880 census, Lars, Nellie, Ole, Henry, Johnny and Betsy S are listed. At the time of the 1885 census, Ole, Henry, Peter J and Betsy and Kate’s mother were in residence, leaving me to believe that Johnny was deceased.

The region our ancestors settled, Gordon Township, reputedly was visited by Viking explorers in 1362. They were said to have sailed on Lake Osakis. The area served as a boundary between the Sioux plains Indians to the west, and the wooded Chippewa to the east. The first government stage route traveled from St. Paul to Abercrombie, ND, passing through the area. The first settlers in 1857 were Mary Gordon and her five sons. The great Indian uprising in the 1860’s uprooted the settlers living there. This ended in 1866, about the time our ancestors began to arrive.

The local churches played a large role in the lives of our ancestors. The church was not only a religious and spiritual center, but also the only social outlet. Settlers were quite isolated on their homesteads. The original Lutheran church was Little Sauk Long Bridge church.

As more settlers homesteaded north and west, it became difficult for many to attend. One farmer complained of having to cross thirteen creeks in order to get to church. Gordon township itself was heavily wooded, with trails leading from place to place. Daardi Svensdatter Gillan, aunt to Bestemor Johanna, remembered that day. “There were Indians everywhere in the woods and the wood and brush was so thick it was difficult to find the way to your nearest neighbor. They used to mark the trees with an axe and thus walked from one mark to the next to find each others’ huts. In the summer, the women were home alone. The men went out to seek employment, many of them working on the railroad in St. Cloud. A pioneer woman had a courage we haven’t got now. Of course, we don’t need that particular kind of courage today.”

In 1872, the Gordon Church was built. Hans Larson Stenoien was trustee of the church. Initially, it consisted of a cabin and was called the West Church, part of Little Sauk Church. It was incorporated 11/26/1878 as the Salem Church. By 1883, geographical considerations mandated building a new church to the southwest, Sauk Valley Church. The Stordal congregation stayed. The Augsburg strife, as well as conflict within the church regarding expansion, did finally split the congregation in 1896. The Stordal group built the modern Salem Church building. Hans Larson Stenoien furnished lumber for the pulpit in 1899.

Harriet Overvig attended Salem church as a young girl. During the 1920’s, services were still exclusively in Norwegian. She remembers the frustration of her father, who felt that children should be fully fluent in both Norwegian and English. This was apparently a common opinion of our Norwegian forefathers. Preayer books, catechisms and hymnals were obtained in Norwegian. However, a conversion to English soon ensued.

Education was important to our ancestors. School district 63 was organized in 1879, the site was donated by Lars and Ingebor Danielson. The first school house was built from logs. In 1886, the school house was sold and moved to the farm northwest from the schoolhouse. A new school house was then rebuilt. The first desks and benches were handmade by L. S. Aus in 1882. There was only three months a year. The salary of the first teacher was $32.56.

School district 23 was organized September 1870. The first school house was built of logs and was located on section 15 of Gordon Township on a small hill west of the Albert Johnson farm buildings. The school was also used for church and Sunday school before the school district was organized. There were benches along the wall for the bigger children, the center of the room was rigged up for the smaller children. There were times when this school had as many as 60 children and one teacher of course. In 1880, they raised the teacher’s salary to $14 a month

School district 68 was organized in 1880. The first school teacher was J. J. Skordalsvold, brother of Lisa who was married to Lars Stenoien.