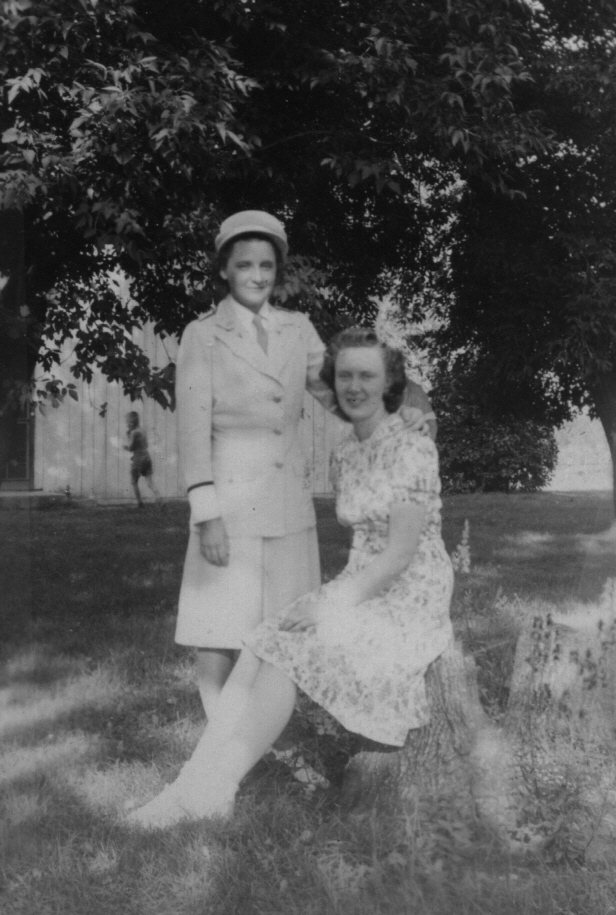 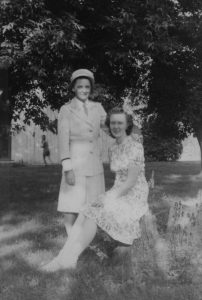 Gudrun Stenoien and Viola Klukken about 1942.

Stenoien, Gudrun E. of Bloomington, MN, age 95, went to her eternal home on February 10th. Gudrun was the second of ten children born to Rev. Gilbert and Emma Stenoien. She is preceded in death by her parents, and three brothers, Joseph, Roy, and Melford. She is survived by 3 brothers, Gordon (Marilynn), Vernon (Borghild), and Daniel (Eleanor); and 3 sisters, Borghild Gisselquist, Rebecca Stenoien, Valborg Harvey. Twenty eight nieces and nephews were held close to her heart, also. She lived with her sister, Rebecca, the last 15 years at Friendship Village. Gudrun lived her life as a servant of God, tending always to the needs of others before herself. Her life of service outside her extended family included a multi-facited career with nursing (RN from Lutheran Deaconess and advanced degree in Public Health and Midwifery) as its base. She served in WWII with “the greatest generation” from 1942-1947 in the U.S. Army Nurse Corps with the American troops through North Africa and Italy. She served 10 years as a medical missionary in Cameroon, Africa with the Church of the Lutheran Bretheren where in addition to work in a remote medical clinic, she also worked as a linguist, developing a reading primer and Scripture translation. Later employment until retirement was with the city of Minneapolis in public health nursing. She will always be an inspiration to all who knew her. A memorial service celebrating Gudrun’s life will be held at Ebenezer Lutheran Church, 4100 Cedar Ave. So., Minneapolis, MN, on Wednesday, Feb, 19 at 11 AM. A luncheon will be served following the service. Gifts in memory of Gudrun arc encouraged for the Lutheran Brethem Church-African Mission, in care of Ebenezer Lutheran Church.

Teresa Stenoien : Gudrun visited us in France when she was in Cameroon. We were fascinated by her stories. She is the reason I am a missionary in Africa today.

Martha Walters: Oh, another one of great ’41 LD nurses leaving us. So many great memories together. Special nurse, servant and friend. God bless you dear. Miss you Goody!

Judy A. Stenoien: She inspired me to be a nurse thru her missions. Her whole family are blessed with Christ, love that surrounded her always!

Mike Jones: Gudrun was a humble servant whose love for others was only exceeded by her love of the Lord. The appreciation people showed her seemed to surprise and embarrass her. Gudrun was a dear friend who will be missed by many.

Bonnie Stenoien Peterson: Wonderful lady and servant of the Lord. Enjoyed a visit with she and Becky a few years ago in Bloomington.

Phil and Sara Wold: Dan, we send our condolences to you & Eleanor, as well as to your entire family. As a youngster growing up in Ebenezer, I always looked up to “Goodie.” She always had time to talk & made me feel like I was very special. In fact, in was she who was special. Our warmest regards. Phil & Sara Wold 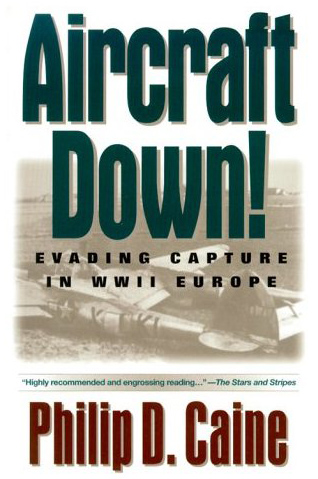 Gudrun Stenoien is mentioned in this book, written in 1997.

Aircraft Down! recounts six extraordinary evasion adventures that took place in Holland, Belgium, France, Spain, Italy, Albania, and Greece during World War II. In 1944 alone, nearly 30,000 American airmen survived bailing out of or crash landing their aircraft in Europe. The great majority were captured immediately.  At the time, Gudrun was a nurse caring for injured soldiers. She was from Mayville, ND.

Gudren wrote this letter to me in 1983 about our Norwegian origins and relatives she met in Stordal on a prior trip.

From the article: Lt. Gudrun Stenoien, who wears three battle stars for 20 months of overseas duty in the Rome-Arno, Naples-Foggia, and Tunisian campaigns, believes that the boyfriend should shoulder his part of the blame. He doesn’t want his girl to enlist because he might get back home all primed to walk down a flower-decked aisle to the tune of the bridal chorus from Lohengrin, only to find that his one-and-only is serving is a hospital overseas, with the army dictating her moves for the duration. That blame he sometimes shares with parents who hinder their daughters from enlisting.

I wanted to update you on efforts I have made to find more information about Goodie Stenoien. I called my aunt, Ruth (Klukken) Edlund, who is in a care facility in Ashby, MN, a few weeks ago. She had been a missionary nurse in Africa back in the 1960’s when Goodie was there but she had worked primarily at Yagoua, Cameroon, while Goodie was about 40 miles away in Pouss, Cameroun, so she hadn’t had a lot of contact with Goodie.

Today we had a visiting couple, Doug and Margarethe Swanson, over for dinner after church. They have been living in Fergus Falls the last year or so after being here in the Twin Cities for the rest of their married life (since 1973). Margarethe’s maiden name was Erickson and she grew up in Africa as her parents (Ernest and Miriam) were Lutheran Brethren missionaries there and were also primarily at Yagoua. Margarethe remembers that, during the rainy season, Goodie and the other nurse with her at Pouss would be quite isolated due to flooding and Margarethe’s family would travel the 40 miles up river from Yagoua to Pouss in a 17′ boat that her dad had acquired with a 25 horse motor to visit the nurses for several days. The last part of that journey involved travel in a dugout canoe! Her dad would do maintenance work at the Pouss station while they were there. One of the things Margarethe remembers was that Goodie had taught some members of the local Mousgoum tribe to sing in two-part harmony (soprano and alto) using a pump organ as her instrument and that they sang very beautifully. Another thing that Margarethe told about was that Goodie had a cuckoo clock at the mission station that fascinated her. Many years later, when Goodie and Rebecca were getting ready to move to Friendship Village, Margarethe visited them and they told her to take anything she wanted as they were trying to significantly downsize so Margarethe asked for the cuckoo clock and still has it! Margarethe also mentioned that Goodie had written a book about her experiences so I’m wondering if you are aware of that and have a copy. BTW, Margarethe’s parents were murdered in Africa in 1978.

Margarethe also has a brother, Jim, who grew up in Africa and then was back there for a few years as a missionary himself so he may have some memories of Goodie. My uncle, Don Raun, (married to mom’s sister, Orpha Klukken) still lives in Fergus Falls. He and Orpha were also missionaries in Africa from about 1960-2000 and I usually see him at least once a year but that didn’t happen due to Covid this year. One other possible source is Dr. David Thompson who was a medical missionary on the same field and was at our church until recent years. I’m hoping to talk to him in the near future and can also ask him about any memories of Goodie.